Deakin University Library’s liaison librarian capacity building program began in 2014 as the Training and Development Program. The program is developed and coordinated by the Library’s Research Services team and Learning and Teaching team. Each round is structured to meet the specific professional development needs of Deakin’s liaison librarians and scaffolds their skills and knowledge development. At the beginning of 2018, the program evolved to become the Liaison Librarian Learning and Research Forum.

Each year features eight sessions run every month from April to November. Each session focuses on a specific learning or research related topic. All of the training topics were designed around an annual training needs analysis. The program is evaluated and reviewed annually to meet liaison librarians’ changing professional development needs.

This infographic shows the range of topics covered from April 2014 to June 2018: 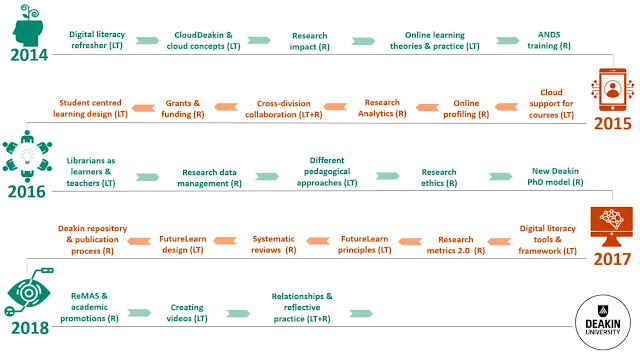 If you would like to read more in-depth about this program, please follow up the papers written by the Manager of the Library’s Research Services team, Sabina Robertson:

The focus of the presentation we delivered for the LARK webinar was around the learning circles program conducted as part of the Liaison Librarian Training and Development program in 2016. In 2016, one of the priorities of the program was identified as developing liaison librarians’ knowledge and capacity in conducting original research. The learning objectives included the following:
The learning circles model was selected to facilitate this particular learning experience.


Characteristics of the model

Organic and open
Collaborative and participatory
Reflective and reciprocal
Also presented during the LARK webinar was a case study of Deakin liaison librarians using the learning circle model to conduct original research. This is a brief timeline of events of how the learning circle group I was involved with went about conducting their research.

April to July 2016
During the first few months of the project, tasks were divided up among the team of six, which included drafting how to recruit participants, designing the focus group activities, completing the project ethics application, completing the research proposal, conducting a thorough literature review and proof-reading everything.

We had the opportunity to consult with academic staff from the School of Education about how the design of the study was progressing and received valuable guidance from them about the direction the study and how to work with participants to gather the data we needed.

We spent this time planning the focus groups, thinking about how the creative activity will be managed, and how to go about interpreting the data. We decided to analyse themes that emerged in the artefacts and participant discussion and to use NVivo to manage the analysis.

In November we conducted two pilot focus groups with colleagues where much was learned, including asking participants to jot down some keywords before they start producing their artefact, to get the creative juices flowing; have some peaceful music playing; and have refreshments available for participants. Then over a two week period the focus groups were conducted with academic staff.

With the end of year upheaval, other commitments happening, and staff leave, our project was temporarily set aside until everyone was back at work during late January 2017.

Towards the end of January our data analysis began. We had recorded the focus group responses with a digital audio-recorder. These files were exported to NVivo and we used the transcription function of NVivo to manually transcribe each focus group. We then interrogated the transcripts to identify themes and used NVivo’s features to map those themes. Themes were brought together from across the different focus groups, and organised into sections when drafting the report on the study.

By July our report was completed and submitted to the Managers of the Client Services division at Deakin University Library. The group then took a well-earned break from the project!

In November three team members showcased the project at the annual CRIG Seminar in Melbourne, which was quite special because it was the first chance we had to talk about the project with other library and information professionals outside Deakin.

One of our group members is a photographer when she isn’t a liaison librarian and was able to take magnificent photos of the artefacts. With these fascinating visual works, we also did some visual analysis of a selection of the artefacts. The main analysis was looking at the comments made by each participant when they were talking about their artefact, but the visual analysis was us interrogating an artefact for particular elements (for example, how the space of the A3 piece of paper was used by the participant, what materials they selected, what colours, and generally how they used the materials available to them to create a representation).

I began drafting a journal article based on our report. Our photographer took more stylistic photographs of the artefacts to use for publishing. We spent a few months drafting our journal article and finally began our submission process in May. Now we are in the ‘watch-this-space’ phase while we await publication.

Lastly, in August I will be speaking about the outcomes of this study in a lightning talk at the Asia-Pacific Library and Information Conference on Tuesday 31st. Please come and say hello if you are attending the conference!